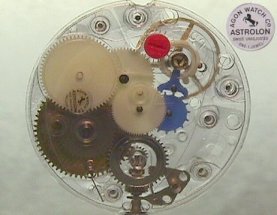 Tissot started to investigate the field of plastics in 1952 and in 1971 introduced ‘Astrolon’ a mechanical (handwinding) movement and case in which the wheels, pinions, escapement, case and plates were all cast from plastic. The number of parts had been reduced to 52 from 90 and by moulding the whole movement, Tissot eliminated 40 time – and cost – consuming operations. Oiling was unnecessary since the plastic was self-lubricating. And assembly work was reduced, requiring only 15 distinct, mostly semi-automatic, operations that were done on an assembly line.

Because the new plastic watch movements were cheaper to produce and easier to assemble than conventional metal models, Tissot hoped that this new invention would revolutionize watchmaking and would inject huge profits into their company and the distributors of this product under many different brand names. Indeed this watch watch was sold in the U.S.A. by Sutton Time, Dynasty, Sears & Roebuck and others for prices ranging from $22.50 to as low as $8. Though the watch was so light at 17.7g (less strap) that it almost floated. Its light weight enhanced its shock resistant qualities which enabled it to withstand the rigors of repeated shock trials. Being plastic, its non-magnetic qualities, too, were enhanced. The watch also withstood normal water immersion tests at 30psi. Furthermore, Tissot’s engineers claimed that the timepiece was so reliable and accurate that it could even compete with a chronometer.

So here you see the striking similarities between the Swatch and, undoubtedly its predecessor, the Astrolon, which never became a hit with the consumer.

Similarities of Swatch and Astrolon:.